I got up late today. I looked at my watch like 4 times before I got up, but each time I was looking at my heart rate. I got my strap that reads my HR in the mail. I didn’t get up until 6:20. When I did, my first thought was I must not have heard the alarm with my ear plugs in. I reached to my ears to take them out and they were not in my ears! I looked around my pillow and in the top of my sleeping bag and nothing. I then looked in my big zip lock with all my maps and such and they were in it. I totally do not remember waking up and taking them out.

Everyone was up and I said my goodbyes and hit the trail by 7:20.
I took the side trail that left directly out the back of the PCT camp site back to the PCT instead of walking all the way back on the road to where I left it. I figured I did enough road miles and side trail miles. I didn’t have directions so when I got to the first junction, I had no idea which way to go. I did some map reading and made my best guess. It turned out to be the right one, which was good since it was all uphill. I joined the PCT at Bobs Hat Trail. My whole day was pretty much climbing. There were some roller coaster like sections but mostly it went up. I crossed Winton Creek, Dump Creek, Sulphur Creek, Dog Trail, and a tributary of the North Fork Castle Creek, which was dry as a bone. I finally got water after a 3.6 mile climb up a brutal grade, and most of it was in the sun. I got water at a cascading creek, though it was more of a trickling creek. I went on to a shady area just past the creek and had lunch. I took a nice long break and answered some emails.

No shade for me

I then had 7.4 miles of uphill traversing to reach Trinity Divide. Depending on which side of the divide water goes, it either reaches the Pacific by the Sacramento River drainage or the Trinity River drainage, which are 280 miles apart at the coast. I got to the divide some time around 5. It was only 2.3 miles to the next road and water, so I pushed on. I made a few calls on the cell phone along the way and admired another view of Shasta. Oh, at times today I could look back and see Lasen again. Once to the road, I ran into a couple from Mt. Shasta, who were placing a geocache (used in a scavenger hunt with GPS; cache is prize) on the PCT. I then took an ATV trail down to a primitive campground to get water. Once there I realized how bad the pond water was. It was full of floaters. I decided to leave and not stay in my third campground in three nights. On the way out, I asked some campers if there was running water here and they said no but offered me some of theirs. They ended up giving me 3 liters of ice cold bottled water.

I then made the climb back up to the road. Once on the other side, I saw what I thought was a cooler. I couldn’t believe my luck. I lose 250′ of elevation to get water and here is a cooler. I go up to it and find it full of water, a cantaloupe, and half a PowerAde. There were also two army ammo boxes with food, TP (toilet paper), clothes, and more. I took the PowerAde to have with dinner then set up camp. I cooked and had my PowerAde and then when I was in my tent, Brad the Trail Angel who runs the cache, came. I helped him load it up and then we talked a while. He was super eager to know what other kinds of stuff he should have and if anyone else did what he was doing. I finally had to go since the bugs were eating me alive and I also had to call Sam. Then it was off to bed

Scatman 2011- The climbing today was brutal!  There’s now other way to put it.  It reminded me of hiking out of Belden Town during that heat wave.  I was carrying a full load and there wasn’t much shade along the way.  I found two king size Snickers on the trail side and they were melted completely.  I had enough food so I left them for someone else to find.  Days later when I saw Silver and Backtrack they said they thought I left them for them.  They took them.

The water fiasco at the end of the day was such a pain in the ass.  I was really sapped and could have skipping the extra distance and climbing.  I can’t tell you how loud I swore when I saw the cooler just a 100′ from where I left the road to descend to the camp ground.  As I approached it I prayed it was empty so I wouldn’t be pissed I wasted my time going do the hill.  It was not to be. 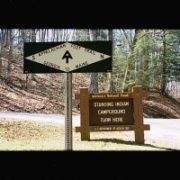