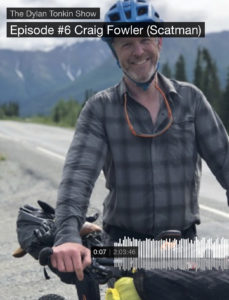 While on my drive from Boston back to Colorado I was sitting in my van (Ulysses) and debating on whether I should try and plan my third round of disc golf or not. I was super tired and my arm was already sore.

Like most people today I avoided the whole decision process by opening Instagram. I noticed I had 6 messages requests from people I didn’t know. I opened them and only one was from a real person. The rest were sex bots try to get a piece of the Scatman! The one real person was Dylan “Pickles” Tonkin. He had just found me on Instagram the day before. He saw I was in New Jersey and like any good online stalker Dylan dug deeper and figured out my plan. My route would bring me right by him.

Dylan reached out as he wanted to interview me for his podcast, The Dylan Tonkin Show. At that moment I decide to throw the towel in on round #3 and drove to Bethesda, MD to stay with a friend. The next day I would drive to Dylan’s, do the interview, drive another hour in the wrong direction to play my round disc golf, then drive back south and ironically stay at another friends house, which was 5 minutes from Dylan’s.

So less than 20 hours after first seeing Dylan’s request I was in his living room recording the podcast. I had a blast talking with Dylan and we really hit it off. So much so, you can now listen to us talk for almost two hours, in what is his sixth episode.

You can listen to my episode or any of the show’s others at the following sources. Enjoy!