One October 22, 2017 I finished the AZT and completed my goal of becoming the first person in the entire world to complete both the thru-hiking and bikepacking triple crowns.  It’s been just over a week since I finished and my opinion is that the AZT was the hardest of the three bikepacking trails.

Once again I started with a cold—my second of the project.  On top of that, the temperature for the first two days was 97 degrees.  Combine these factors with not riding for most of the month before hand and the mixture was one that was determined to lead to some failure or another.

I didn’t believe this  because my ego told me it wouldn’t be a problem.  I went out hard and by day two I was already behind the eight ball as the saying goes.  I rode 77 miles on day one and only could manage 40 on day two.  I was so out of it, I could barely lift my leg over my saddle!  A nice gentleman named Craig gave me a Gatorade towards the end of the day, when I was at my lowest and I could only drink half of the 16 ounces.  I was so sick to my stomach with heat exhaustion fluids and food were not really an option. Day three saw me only riding about 20 miles to Tucson, where I checked into a hotel at 8 am, showered and crawled into bed.  I went back out at 3 am to beat the heat but only managed 40 miles.  I was half way up Mt. Lemmon when I knew I was in trouble.  I called Josh, my new friend who picked me up at the airport and dropped me off at the border to come get me.  I would stay at his house for two days, hydrating and putting as many calories down as I could.

After rebooting for two days I started again on Mt. Lemmon where I left off, at mile marker 14, on Friday, October 13th.  Determined to not repeat my mistake I checked my ego, and rode smarter than the first two days.

From Mt. Lemmon to the top of the Mogollon Rim, I had more hot days in the 90’s and even more tough trail.  The AZT has a very unforgiving tread and being that it was now Fall, the trail was quite over grown in areas, which made riding even more challenging.  Everyday was a test of my mind and body.

It seemed like I could never relax on the bike due to the intense trail conditions.  Multiple times a day my front wheel or rear would simply slip on a rock and Phillip would buck under me.  The Cat’s Claw tore at my shins, leaving me and my socks in a sad state of affairs.  I stopped putting sun screen on my shins due to the amount of dust already there.  Finding shade was impossible at times.

After finishing the first 300 miles, which everyone says is the hardest part, I knew I had three big tests before reaching Utah and the finish.  The first was the Mogollon Rim, next was the Happy Jack area, and the last one would be the Grand Canyon.  This isn’t to say that the rest of the riding would be easy, it wasn’t.  To give you an understanding and really put this in perspective: the Highline Trail that starts near Pine, AZ and tops out on the Mogollon Rim, is 16 miles long.  It took me 7.5 hours to cover that ground!  That’s a fraction over 2 mph… on a bike.

If I’m honest with you and myself I can say there were very few sections of trail that were enjoyable for me—but that’s not to say it wasn’t beautiful!  I have a weird love hate relationship with the desert.  It’s beauty captivates me but I dislike the extreme heat.  It’s so vastly different from the woods of New England where I grew up.  Maybe that is why I like it.  The painted cliffs, cactus, amazing sunsets and harshness all blend together to make something beautiful.  When I say it wasn’t enjoyable, what I mean is that in the fashion I was doing it, it wasn’t enjoyable.  I’m sure many sections would be amazing as an one day ride. Maybe it was my weakened state or the heat but most days the trail was just brutally hard. Still, there were most definitely sections I liked.  Going into and out of Flagstaff was great, and the last 27 miles of the trail down to State Line Campground were amazing.  The flow of the single track was spectacular and I was able to ride almost carefree compared to the other sections of trail.

The Happy Jack area brought two things to the table, lava rock and more heat.  Luckily for me it only lasted a day.  The slow going over endless miles of trail and roads covered in lava rock was grueling at best.  Finding a rhythm was nearly impossible at times.  I would swing from one side of the road to the other in feeble attempts to find a smoother more fluid route, only to be disappointed when the better line faded out to more lava rocks.

When I reached the South Rim of the Grand Canyon I was so excited!  I couldn’t wait for this last test.  My excitement was short lived as the enormity of the task quickly was realized and I knew it was going to be a long arduous hike from one side to the other.  By the time I reached Bright Angel Campground at the bottom of the canyon it was dark and my calves felt like someone was poking me with a knife with each step. After some trouble finding a ranger to show me where I was sleeping, I had the pleasure of trying to set up my tent in wind gusts up to 30 mph.  It was bad enough I could barely stand, I had to deal with the wind too.  It was one of those nights I couldn’t get horizontal fast enough.  Knowing the climb out of the Ditch was going to be insanely hard I forced myself to eat some food and drink at least one bottle before I hobbled to my tent.

I awoke at 3:30 am to get an early start on the day.  My buddy Brett told me it would be a long 12–14 hours of hiking to cover the 14.2 miles to the North Rim.  My calves felt a little better, but it was still uncomfortable to walk.  The first 8 miles of the climb were maybe a 4% grade which was forgiving.  The last 6, not so much.

The only good part of the climb were the looks I got from hikers descending into the canyon.  At first you saw the look that said, “Wow, that guy has a BIG pack on!”.  As they got closer and saw my pack was actually a bike their eyes almost popped out of their surprised faces.  It was comical, and made me laugh.  I got all kinds of accolades from those I passed.  I told each of them I would believe/accept them only when I got to the top and thanked them for their kind words.  I think seeing me carrying all of my equipment and my bike on my back also made a lot of people feel bad about bitching about their little packs and how hard it was for them.

When I got to the top I was simultaneously relieved, happy and utterly exhausted all at once. I didn’t actually feel any of those feeling but they were still there, buried under pain and discomfort.  I was so out of it, it took me almost five minutes just to get my rear axle in my wheel.  Once I had Phillip back together my next task was actually getting on him.  My hips were so sore I couldn’t lift my leg high enough to swing it over the seat.  I figured I’d try leaning the bike and stepping over the top tube.  I couldn’t even do that.  I had to go over to a curb where I could be higher than the bike and even then I still had to lean Phillip over to get my leg over him.  It was a pretty tough pill to swallow that I was that wrecked after the climb out of the canyon.

The climb took me eight hours!  Those eight hours were some of the toughest I can recall from either triple crown.  I would hike the canyon again but never with a bike strapped to my bike.  With so much darkness and the burden of Phillip on my back I didn’t get to enjoy and take as much of the experience in as I would have liked.  A trip back is definitely needed.  If you ever get the chance go and hike the canyon—it’s simply amazing. After it all, the AZT was definitely the hardest of the three trails for me.  I like to think starting with a cold and then the heat problems I was having kept me from enjoying it more but I’m not sure it that’s true or not.  In the end, all that matters is I completed it and completed my goal of becoming One of Seven Billion by being the first to complete both the thru-hiking and bikepacking triple crowns.

I can say despite my best efforts to keep my ego in check I failed in the first quarter of the ride to do so.  It was a tough lesson but one I won’t soon forget.  Now that I’m done, I don’t feet any different from before I started.  The bikepacking triple crown, just like the thru-hiking one is just something I did.  I did it to test myself physically and mentally, to see if I could.  I did and now I go on.  To what I don’t know, but I’m sure I’ll find another trail to challenge myself with. 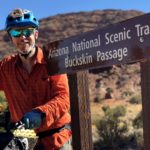 My Favorite Gear from the Bikepacking Triple Crown
Scroll to top