Cycling, and almost anything outside! 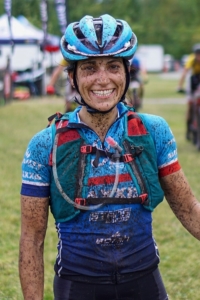 My loud laugh!  The ability to look for the positive in any situation, even when sometimes it feels life is trying to knock you down.  I make it a point to remain positive and try to find the reason for life’s happening’s.  I remind myself that even if I don’t see it now, that down the road there is a reason for today.  I also firmly believe a positive mindset can heal both body and mind.

My Warrior bracelet!  :). Just kidding, I think I was born with my motivation.  That’s a strange thing to say, I know, but I think it’s true.  When I get something stuck in my head that I’m going to do, I will accomplish it.  My Dad likes to tell this story of me when I was learning to read.  I locked myself in my room until I could read.  My motivation for coming back from hip surgery I think stemmed from wanting to prove everyone around me wrong, and that I could do it, and I could do it better.  So maybe my motivation comes from my competitiveness too!

This is a tough one, mainly because barriers are only obstacles, and I work hard to follow my passions, even if I have to jump the moon to figure it out.  You could say rising to the professional ranks in cyclocross had its own barrier, figuring out how to fund traveling across the country to feed my competitive drive, and learning how to market myself as an athlete for sponsorship.  At a point when I felt like I was just understanding everything, I learned what my years of hip pain was, and ended up getting an arthroscopic hip surgery, and 5 months PO from that learned I needed my other side done.  Having 2 hip surgeries within 1 year of each other presented its own barrier, which I treated more as an obstacle I had to climb over to conquer.

The power of positivity!  Drive!  Determination, and never quit fighting!  It’s kind of like a bike race, keep your head up, keep fighting, never give up, because the end isn’t here yet!

You’ve battled injuries many times. How do you continually come back from them to compete on the National/World Cup level?

Maybe it’s stubbornness!  I have a few friends who have undergone the same hip surgery as me, and they’re always telling me how amazed at what I did after surgery (I started racing 7 months PO after each surgery).  To me I felt like I didn’t have an option, it was, have surgery, recover hard, get strong, get fit, talk yourself off many ledges of thinking you re-injured yourself and get after it.  I also have an amazing support network around me.  My husband was there every step of the way, I have an incredible team of healthcare workers that helped get my body back where it needed to be, and my sponsors stuck by my side and supported me through both recoveries.

Doing everything I couldn’t do the last 2 years because of hip surgeries!  I just completed my bucket list race, the BC Bike Race, a 7 day mountain bike stage race through coastal BC, and it was INCREDIBLE!  To top off the whole experience I finished 2nd in the solo women.
For the first time in 3 years I went on what I like to call an “adventure ride” in the mountains with my friends.  7 hours of some of the craziest terrain I’ve been on, with loads of hike-a-bike, scarier than scary exposure, and amazing views.  It was what my soul had been craving for years and even though my shoulders were sore from pushing my mountain bike up the steep mountain I couldn’t help but smile and be so grateful for my body and what it can accomplish.  Racing feeds my soul, but these kind of adventures feed my soul in a whole other way that competing doesn’t.  It allows you to take in nature and appreciate the world we live in, the body we’re gifted with, and you’re crazy friends who will go on these adventures with you.
Lastly for Fall of 2019, I’m looking towards cyclocross, my first season since 2016 that I won’t have had hip surgery before, and I can’t wait to see what I can accomplish!

I don’t have a favorite inspirational quote.  I recently discovered this company called “Mantra Band”, they make bracelets, necklaces, and rings that have inspirational sayings or words on them.  I wear a bracelet on my left wrist that says “warrior”.  It’s my daily reminder that I fought for everything I’ve been through, I’ve conquered not 1 but TWO hip surgeries, and I’m STILL competing at the highest level.  A warrior doesn’t give up, and a warrior is here to fight another day.  It’s my constant reminder when I’m mid interval or race of what I’ve been through and to keep going.

My Thoughts on Courtenay

I first met Courtenay when she was racing mountain bikes at the local level in Bellingham, WA. She was fast then, she’s even faster now!

My impression of her was she was one of those people who always seemed happy and truly enjoyed riding/racing her bike. During my research for her profile she told me that when she first tried bike racing (road) she hated it. Clearly, she changed her mind.

I would see Courtenay at the local cyclocross races, where she told me she really feel in love with racing bikes. Over the years I saw her progression. Since leaving the Seattle area I continued to followed Courtenay’s cycling career via social media. I’m always impressed by her positive and up beat attitude. Don’t think for a moment it’s a front like some people put up online. It’s NOT.

The most impressive thing for me about Courtenay was her tackling of not 1 but 2 hip surgeries almost within the course of a year! In the Spring of 2016 she diagnosed with Femoroacetabular Impingement (FAI for short) and a torn labrum in her right hip. Not wanting to miss the CX season she managed the pain, qualified for the US CX Team and finished 15th at the Cyclocross World Championship in Luxembourg. 10 days later she had her first surgery.

After four months of PT and recovery, Courtenay finally got to ride outside. At seven and a half months she was back racing CX in the Fall. She had an amazing season, finishing 4th at the US CX Nationals, and went back to the worlds. Three days later she had her left hip surgery.

Throughout it all Courtenay never stopped battling. She never gave up and got back to the World Cup level. I’m always impressed with her attitude and the way she bounces back from set backs along the road to recovery or life in general. She’s never let what she’s been through change her as a person. She still has her “loud laugh” and zest for life. Those who know her, see not only an amazing bike racer but a genuine human being who’s friendly and approachable.

When a pity party hits me, all I need to do is think about what Courtenay would do and it’s game on!