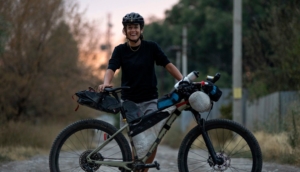 I started riding to get to and from work at a brewery while in college in Tacoma, Washington. I don’t know how to drive and I’ve never owned a car. I used to walk everywhere. The bike opened up my world.
One day, I rode forty-five miles from Tacoma to Seattle to visit my sisters. Inspired during my ride, I thought if I could ride from one city to another, I could ride across the country. I wanted to get out there as soon as I could, but I was totally broke. I graduated college that spring, worked in Alaska for the summer to save money and then rode down the East Coast in the fall, from Boston to Montreal, down to Key West, Florida. That was in 2008.
For the next seven years, I worked seasonally to save money for bike trips all over the world. During a nine month trip in 2015, while riding in Israel, I realized I would still be in the country during an 850 mile bikepacking race. I entered the race on my touring bike, a cheap steel hardtail, for fun. I was the only woman. By the end of the first day, I was 25 miles ahead of the man in second place and having the time of my life.
From Israel, I made a plan. I’d fly back to Alaska, get a racing bike, ride 2,100 miles from Anchorage to Banff, take a week off and then race the 2,750 mile Tour Divide. I’m from Alaska and I’d never traveled through Canada to the US. I wanted to see how my state connected to the rest of the country. I took 19 days to ride from Anchorage to Banff. It was my first long solo ride and I felt so much freedom. I rested for a week in Banff and then started the race. On that ride, I broke the women’s record, taking it from 19 days to 17 days. Since then, I’ve raced the Tour Divide three times. My fastest time is just under 15 days, 11 hours. My overall goal is to break the men’s record of 13 days, 22 hours, 51 minutes.
The next year, in 2016,  I raced the Trans Am Bike Race, 4,200 miles from Astoria, Oregon to Yorktown, Virginia. I was in second to fifth race for the entire race. During the final night, I caught the leader and beat him to the finish to win the race. The whole thing took me 18 days, 10 minutes.
I’ve raced and ridden more than 100,000 miles around the world in 45+ countries. There are so many more places to ride.
I’ve hosted two women’s scholarships and run a middle school girls cycling mentorship program in my hometown. I’m motivated to encourage more people on bikes, especially more women.

Even after weeks of riding with sleep deprivation and sacrifices, I’m still smiling. I really love being out there.

I’m driven by dreams.
I see a long distance on the map and I want to ride it. I love entering races and setting up my own challenge rides because there is so much unknown, they’re so unpredictable. I want to spend all that time outside. I want to push myself and see what happens.
I get so focused on ideas. In January of 2017, riding the Baja Divide my friend, Cait Rodriguez, and I came up with the idea for Anchorage GRIT, our middle school girls cycling adventure program. By April, we were working with eleven 7th grade girls, preparing them for a 60 mile adventure ride from their school to the wilderness. This spring will be the fourth year of the program and girls come back every year to be student mentors.
I feel an urgency to go after my dreams. I can’t let them sit.

Money has definitely been a limiting factor for me in the past. I worked hard for years to fund races and trips. I am incredibly grateful that for the past two years, I receive enough money from sponsorship to live on and pursue my goals. Without working a job on the side, I have more time to ride and contribute to the bikepacking community.

I’m pretty efficient with my time. I try to fit in as much as I can and find creative ways to fit in adventure rides.

Why quit now? You can always quit later.

Can you put into words or give insight into what drives you to push yourself so far on the bike?

All of my motivation is internal. I’m driven to do my best because I feel like if I didn’t, ultimately I’d be disappointed in myself.

I know you work with young girls to help empower them through the use of cycling, can you tell us about this and it’s goal?

Yeah, my friend Cait Rodriguez and I run a program called Anchorage GRIT (Girls Riding Into Tomorrow). We work with low income 7th grade female students. The program is six weeks long meeting 2-3 times a week after school and some Saturdays. The goal is to build up to a 60 mile, three day adventure ride from their school in East Anchorage to a forest service cabin at the end of Eklutna Lake. Each meeting includes a ride and some kind of lesson (route finding, first aid, bag making, mountain bike skills, bike maintenance, basic mechanics…) We work with about 15 girls each year. Specialized provides the bikes and Revelate Designs provides the bags and at the end of the program, the girls earn their equipment. There are typically 8-10 adult female mentors. The program is not competitive, the main idea is to get girls out on bikes, to be active and take care of our basic needs, to take on a big challenge. It’s amazing to see the girls improve over the six weeks. The first ride they’re wobbly and the eight mile ride is the farthest they’ve ever gone. By the end, they’re riding with confidence, spending all day in the saddle.

I have a lot of plans up in the air right now and 2020 is looking really packed. I may be traveling to Colombia in January and February for a project with Conservation International and Bikepacking.com to help establish a 250-300 mile ride in the mountains around Bogota to bring awareness to the Paramos, a high elevation plant responsible for capturing moisture and providing all of the drinking water for Bogota, a city of 8 million. I’ll be guiding endurance gravel camps with The Cyclist’s Menu in Southern Arizona in February and March. I’ll be running Anchorage GRIT in April and May. I might be doing a time trial with Jan Heine on the Oregon Outback route at the end of May.  If conditions are good, I’ll be racing the Tour Divide in June. And then I’ll look to see what else I can fit in 🙂

My Thoughts on Lael

I first me Lael when she stayed at the place I was living in 2013. A friend of her’s was one of my roommates, and had offered Lael and her boyfriend at the time our floor. They were touring on their plus size bikes. Listening to their stories was amazing.

As Lael told her story to me in my living room you could see her passion for the bike and also living on it too. The “Dreamer”, as Lael describes herself as, was right there.

It’s been amazing to watch Lael’s journey over the past six years. Seeing that passion I got to experience in my living room blossom into what it is today is incredible.

Watching Lael push her limits, as well those of others, while redefining the limits of bikepacking and endurance cycling has been nothing short of amazing. There are times when I find myself unhappy on the bike and have to find my inner Lael, and remember to smile and just enjoy myself and the ride.

I can’t wait to follow the rest of her journey.