I didn’t get up until after 7 AM! I enjoyed the comfort of a bed and took full advantage. I woke up and walked to Bob’s Ranch House where I had lunch yesterday. I had breakfast and then headed back to the Hiker Hut. I got an email from my friend BA, who hiked the AT with me. He was in Weed, CA about an hour away. I called him and he agreed to come pick me up and catch up since I hadn’t seen him since 2002. I just sat around until he got there and then we drove to Weed. We got rained on a few times during the drive. I got to see Mt. Shasta, or at least the bottom third from the north.

He dropped me off at the hotel and had to go to the job site he was working on for a while. I watched TV and did some email. When he got back, we went for BBQ and then went to Fowler’s Falls to fish and drink beer.

As I typed this a Gardner snake was watching me from 3′ away. It was the fattest one I’ve ever seen. BA fished while I sat and journaled. BA got a couple of fish but we saw some others that would of done quite well. Around 7 PM I was getting hungry so we left.

We drove to Mt Shasta, the city, and got pizza and beers. The place we went to was teenybopper central. I felt like an old man. The pizza was good and I left in a food comma and was feeling it.

Once back to the hotel, I felt the call of nature so I called first dibs on the bathroom. Then we tried to unlock the door to the hotel, and thats where the “shit” hit the fan. The key would go in the door, but it would not turn. I stood there in disbelief at my bad luck since I really had to go. He must have tried for close to 5 minutes to get it to open but nothing. He then looked at one of the other doors and noticed that on ours there was a small nub sticking out. He got something to hit it with and finally got it to go back in. He tried the key again and it worked. I was so relieved. I went straight to the john and all was good. I was sure I was going to serve into the net.

We crashed out on the bed and BA was asleep within 10 minutes. I stayed up until 11 and then went to bed.

Scatman 2011- This would be my last Zero Day until I reached the border of Canada, over a 1000 miles away.  It was so good to see BA again.  We had discussed him driving out to Donner Pass but it didn’t work out.  The last time I saw BA was at Rusty’s Hard Time Hallow on New Years 2001.  He had spoke once or twice but that’s it.

Seeing a face I knew and had history with was up lifting.  Though I met people daily and hiked with a number of groups on this trip I rarely saw someone I knew from off the trail.  That extra connection with those few people in a way reminded me of home and something I knew.  Everyday on the trail might be the same in that your hiking but each one is different from the next.  No two days are the same.  The scenery changes with each step, as do the names of the mountains and trails you pass.  Familiarity becomes a thing of the past when thru-hiking.  Maybe that is part of the apply of it. 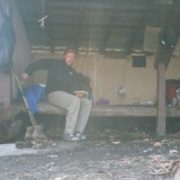