We woke to rain on the fly of the tent and spokie dokes passing by. The international kids, as I heard them called, were up early and leaving. We got a slow start due to the sprinkling rain and my flat tire. I couldn’t find a hole in the tube so I’m thinking maybe one of the people at the bar night have left the air out. Who knows for sure. I slept well for the most part but and actually woke up hungry but when it came time to eat I didn’t consume much. We thanked the owner Greg for letting us sleep on his grass, filled our bottles in the restaurant and started on our way in a light sprinkle. The first hill came pretty quick and about a little less than half way up my chain jumped off the top cog and down into the spokes! I stopped pedaling as fast as I could to limit the damage. I got off and frustratingly attempted to move my bike and trailer to the side of the road without rolling the bike which would make matters worse. Next came trying to get the trailer off so I could work. This is not usually a tough task but on a hill both bike and trailer want to roll. I had a fight with both and finally won. The next battle was getting the chain unstuck. My first attempt only succeeded in blackening my hands with grease from the chain. I sat down between the bike and trailer like I was separating them giving them each a “timeout” and had a moment. Once I cleared my head I took a second crack at the chain and this time I won. My hands even more black I put the trailer back on, bent the derailleur some, and then slowly started again. I appeared to have fixed it. The ride was uneventful and I consistently yawned through the day. We took a few breaks which helped me. Once was at a rest stop where I just laid on the pavement next to Josh and chatted. The next was at a place I had mentally picked for lunch. When we found out they didn’t have any soda for sale but there was a store two miles down the street we left for there. We were told the international kids were just in front of us. As I expected they were at the store getting ice cream. We all hung out a while and took a break. After they left I made some lunch. At first it was tasty and I was enjoying eating but quickly I lost my appetite once again and had to force food down. Mike and Josh just had soda and ice cream. We took off some time after 4 pm and made a group decision to checkout Grizzly Lake, a campground spot we were told was nice. The international kids were going there as well. When had two more options after Grizzly Lake so when we got there and had a tailwind and it was still early, we pushed on. We were treated to a 1.7 mile downhill that rocked. I got up to 45.3 which is the fastest I’ve been in a while. At the base was campground #2 and once again we pushed on. It was only three short miles to our current camp at Porcupine Creek. It’s a nice place. I took a whore’s bath at the creek and Josh made a fire, which is our first of the trip. Overall the day was okay for me. I didn’t feel great and I didn’t feel terrible. I’m still feeling exhausted but the tailwind helped me not notice it so much. We had some views of the Wrangell Mountains and some great lakes in the middle of swamp land that looked amazing. Tomorrow we will get to Tok. 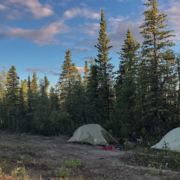 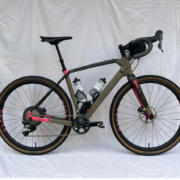