I slept well last night even though it sounded like thunder was rolling through my stomach as I attempted to fall asleep. The morning came fast and I was actually up before Mike for the first time on the trip. Mike did have a bad nights sleep so… We also woke to rain on the tent again but it stopped shortly before we started our day.
I woke up hungry again which I took as a good sign and did my best to eat as much as I could. I didn’t really like my options much so a while down the road we camp to Mentasta Lodge and I ordered a sausage, egg and cheese on a muffin. It was $6.50 but worth the price in calories. Yeah everything in Alaska costs a lot.
Before our breakfast stop we saw a single cow moose and then a cow and a calf. Seeing them put a smile on my face. The calf was pretty big, so I’m guessing it was a yearling. I also saw a Bald Eagle, Trumpeter Swans (mom, dad, and four babies) and some other ducks. I’m guessing one was a Grebe of some sort.
The views were mostly of spruce swamps and some mountains. They were nice enough but after some of the other ones we’ve seen they seemed so average. The reality is they were pretty nice. As the day wore on the mountains slowly faded out. Lucky for us we rode down a valley the whole time and the end of the ride was so fast as it was all downhill into Tok.
Once in town we got a room at Young’s Motel and had dinner at Fast Eddy’s which is out front. Our room is a combination of bikes, clothes, and camping gear. The smell reminds me of my hiking days. The room is ripe and it’s taking a long time to cool down.
My appetite seems to be back but I fear the damage is done. I’m a waif. I looked at the pictures I took before I left and the difference was scary. If anyone is missing a six pack I think I found it. 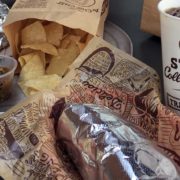