For a while now I have been selling anything and everything I don’t feel I need or want on CraigsList. I got to the point where I had more than I needed or wanted in my life. It was high time I simplified. So just the other night I went to meet someone at Trader Joes to sell them my old Golite Breeze pack. The breeze was the first backpack I bought after my Appalachian Trail thru-hike.  I went from a 6+ pound Arcteryx Bora 65 to the Breeze at 16 oz. The plan was to sell the pack then do some much needed grocery shopping. When I arrived I called Jake, the guy buying the pack and he was already there. I could see him in the produce section coming towards me, he looked like your average mid to late 20 year old. He had on a North Face jacket and had that outdoorsy look to him. It was a look that said the pack was going to a good home.

Me with my Golite Breeze pack and the best grand mother in the world.

He looked the pack over and said he’d take it. Money was exchanged, bills and coins as Jake informed me that he had to rob his piggy bank to come up with the last three dollars, such a true gear junkie like myself. On a whim I asked him if he hiked a lot.  His response was simple and spoken without any pretentiousness what so ever.

You usually don’t hear someone describe them like that but I instantly knew exactly what he meant. He had hiked the Triple Crown.

I looked at him and said, “You’re a Triple Crowner! That’s so cool.”

Then I shook his hand. That one simple sentence sent my mind racing and humbled me at the same time. Just then his girlfriend Katie came over and introduced herself.

Jake and Katie or as their known on the trail, Don’t Panic and Wing it did the PCT in 2008, AT in 2009, and the CDT in 2010. We chatted a bit more and went our own ways just as one does while hiking. We all had different goals and different schedules, like  how they have managed to hiked all three one trails in three years while it’s taken me 6 years to do two of the three. I dream about the Continental Divide Trail a lot.

As I’ve gotten older my view of what motivates, inspires, and impresses me has changed greatly. No longer am I impressed by average feats. The things that motivate me are epic and to most over the top. Their things I doubt I can actually do. It’s rare I’m impressed by those around me, so when Don’t Panic said he hiked the Triple Crown it really moved me. This isn’t to take anything away from my friends and their accomplishments but epic is epic. Of course I realize all things are relative to they eye of the beholder. What’s epic to someone else might not be for me and vise versa. Personally I know it takes a lot to move me and inspire me. When it comes to mountain biking, the local series isn’t going to get me off the couch per say but the idea of riding the Tour Divide or bikepacking will.

Two down, one to go!

So when I look at this as objectively, as I think I can, I realize I’m motivated by my desire to complete the Triple Crown, which was never my goal when I first stood on top of Mt. Katahdin so long ago. Don’t Panic’s and Wing It’s achievements are not better than all the ones I’ve accomplished but just different. They choose one path, me another, each right in its own way just like what motivates each of us. What I have learned is listening to oneself is not that easy when you let others or society dictate your decisions. Find what drives you and motivates you and humbles you and do it. Fuck what others think or say and do it for you. I love that I was humbled by Don’t Panic and Wing It. They reminded me of what is important in my life, and that’s living a life of adventure, exploration, and driving myself past my perceived limits.  Listen to your inner voice and pay attention to the road signs in life. 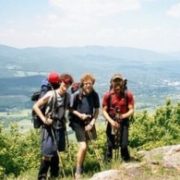