By the time I finished typing in my journal, my sleeping bag was covered with dew. I woke up to ice on it. My Ibex Long Johns and Zephyr top kept me warm. My bug net did fall once; but it worked great. I was up at 5:20 AM and everyone else was up shortly after. I didn’t get hiking until 6:40.

It was downhill for the first 2.7 miles. When I got to Woods Creek, I missed Stick and Wing Its tent. I crossed the suspension bridge and waited for Wounded Knee since he was going really slow. I thought Path Finder and Ed were up ahead; but they both showed up before Wounded Knee. Nature’s call got them both and I passed them without knowing it. When taking pictures of the gang crossing the bridge, I noticed the local bears were using the two main tower beams as scent trees. They were all clawed up and there was hair stuck on them from them rubbing up against them.

From the bridge we had a 7.1 mile climb. Path Finder took off and we never saw him again. The climb went on forever. I did see a couple of lizards which I didn’t expect. I stopped once just before the half way point then again at the half way since Stick and Wing It were there. I dried my sleeping bag and had a snack.

The second half of the climb was so long and I had nothing to throw at it. Even though I felt exhausted, I was still doing 2.5 mph to Ed’s 2.1. I had to stop before the top of the pass (Pinchot) to eat lunch. Ed joined me shortly after. The final part of the climb was even tougher.

Once to the top we descended to Lake Marjorie where I fished for the first time. I got 7 fish while Ed took a nap. He woke up and gave it a try and caught 4. I caught another 3 making my total 10. By this time Wounded Knee finally showed up and said he was exhausted. We all agreed and moved on to camp.

We descended to the South Fork Kings River Trail where we all got water then tackled the final 2.2 miles climb. It was through a beautiful open valley along the South Fork Kings River. We didn’t get to camp until 7 pm and I didn’t eat until almost 8. My tarp pissed me off again while trying to put it up. I was too tired to deal with its complexity. I’m now inside my bug net away from the bugs and off to bed.

Scatman 2011-If yesterday was hard today was exhausting.  It was like how when you lift weights you don’t feel it the next day but the second day.  It was like that with our day off.  Everyone one of us felt beat down.  Despite being so tired it was another amazing day of hiking.  The fishing was good even though they were tiny.  Part of me wished I could have hiked more with Pathfinder.  I enjoyed my short time with him and he hiked at my pace. 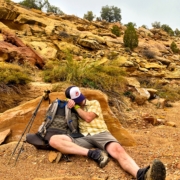