Last month, I wrote a post for Big Agnes about my bikepacking trip in Alaska, in which I mentioned how bad the mosquitoes were and that I suffered from night terrors during the trip. The folks at Big Agnes were so intrigued that they asked me to write another post centered around these two subjects.

There’s a joke that says the mosquito is the Alaska state bird. (It’s actually the willow ptarmigan.) During our trip, there were actually fewer times with mosquitoes than without—luckily for us, we were either moving or there was a breeze—but when there were mosquitoes, they were bad!

The single worst night was on Day 4. Scott and I were deep into the interior of Alaska, about 54 miles north of Glennallen on the Richardson Highway. We had already stopped and looked at a few potential spots to camp, but they were either too close to the road or very “un-flat.”

I’m a lot like Goldilocks when it comes to camp spots: they have to be just right. As we passed up each potential spot, the day got longer and our willingness to keep pedaling lessened. When we finally decided on one, the mosquitoes were all over us before we even stopped. We had already put on our rain gear in defense against the little bastards but as soon as we pulled over, the head nets came out too. Any time we stopped moving, we would instantly have dozens of mosquitoes all over us, each one trying to find a weakness in our defenses.

I tried my best not to let any into my Fly Creek HV2 Platinum. Once in my tent, I found that three out of the thousands surrounding us had managed to breach my defenses. In what some would call pure luck, I struck and killed all three enemy combatants in one go. It was, and still is, secretly one of my greatest achievements.

As I mentioned in my first blog post about the trip, I had a head/chest cold and because the crud in my lungs moved into my head, when I laid down. I ended up sleeping with my head in the end of the tent that slopes downward from the door, where my feet would normally go. This meant I had hundreds of mosquitoes just inches from my face, that were trapped between the tent body and fly. Even with my earplugs in, I could hear their dull and annoying buzzing—not the lullaby I was hoping for. I feel asleep knowing Big Agnes had my back and that the mosquitoes couldn’t get in.

If Big Agnes is the Mother of Comfort, then my experience on Night 3 was the Mother of Night Terrors! For the record, I do not have night terrors on a regular basis. I can’t even recall the last time I had one, though after telling Scott about my ordeal on Night 3, he informed me that I’d had a small one on Night 2 as well.

It went like this. In my dream I was putting up my tent, as you see it in the picture above. Everything looked just like in the picture, everything! As I turned away from my tent to grab a piece of gear, I noticed the back right corner stake was no longer firmly in the ground. I thought to myself how odd that was, because I knew without a doubt I had put it in the ground. I proceeded to reinstall the stake, then I turned and walked back to the front of the tent.

I screamed “WHA- WHAT THE F—-!”—or at least I tried to, as my voice was somehow muffed to a faint whisper before I could get all the words out. In less than a heartbeat, I noticed that all the trees and Scott’s tent were gone; I was now in a metal-sided building. There was an opening just 6 feet away from me and I could see Scott standing just outside the opening at the picnic tables; but there was some super creepy dude coming towards me, with terrible malice in his eyes.

I tried to yell louder and still nothing. Nothing came out. It was like when Neo was being interrogated by Agent Smith in the Matrix, except I still had a mouth. I looked around the building to see what else had changed. I turned to see dozens of people throughout the building. Some were naked and involved in non PG-13 acts we don’t need to get into here and the building was full of junk, which was piled throughout.

I turned to run out of the building but I couldn’t move. Just like my voice which was muted, every fiber of my being was frozen by some unseen force. I fought with everything I had and slowly coerced my legs to move and somehow overcame the force trying to hold me. It was like when someone shoots a gun on a plane and it depressurizes and everything sucked out. Imagine trying to fight your way into the plane, against that force

Once outside, I told Scott my story and he could now see the building too. At this moment the dream jumped to it not being my tent that was missing, but my backpack. (Don’t ask me how our bike trip became a hiking trip!)

After telling Scott what happened, I got really pissed off—like Hulk mad—and went back into the building for my pack. I confronted the creepy dude and threatened the shit out of him. I told him I wanted my backpack, and that it was worth $5000! At first he resisted, but my threats got more violent and finally he agreed to give me my backpack. He wasn’t sure where it was, but he started looking through all the clutter in the building. I followed him around continuing to yell at him that he’d better find it.

At this point, the night terror just stopped. I don’t know if I got my backpack back or where my tent disappeared too. When I first woke up, I recalled having the night terror but at the same time I didn’t. I started to tell Scott about it and how my tent disappeared and about the words scrawled on the ground. In reaction to this, Scott told me that I said those words out loud in my sleep. At that moment, it was if the whole story came back to me, even though I was already telling it.

A mixed wave of adrenaline, confusion, and fear washed over me. It left me with the oddest feeling I’ve had in a long time. I finished telling Scott the whole story from the missing tent, to our camp becoming a pre-fab metal building filled with junk and the scary-ass guy, to the mixture of other people. When I finished, Scott just looked at me with a blank expression of pity and wonder.

We would joke about my night terrors for the remainder of the trip, and each time I secretly shuddered inside. 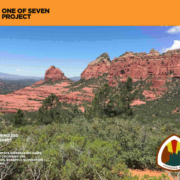 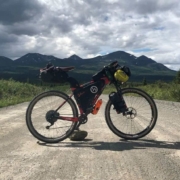 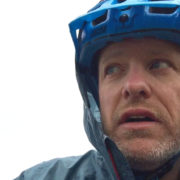 How to Stay Dry While Bikepacking