Last night I was in bed and attempting to sleep before 9 PM. I haven’t done that in a while. It was good that I was since I have been doing big miles for weeks now. I woke up around 5 but didn’t get going until 6:15. I hit my mental snooze a few times. It was another chilly morning, which made for nice hiking. I had a short climb before I descended to Highway 3 at Scott Mountain Summit. There were a few cars in the parking lot but no people. After leaving the road and climbing a short way, I entered the Trinity Alps Wilderness. I also passed Greenleaf going S.B. He was headed back to town to take a day off. He said he was really tired and needed a rest day.

I climbed for the first part of the Trinity Alps, passing some small streams and seeing my second deer. All the streams and springs made it hard to know where I was on the map. I crossed a road finally and that told me where I was. I traversed some beautiful mountain sides and had incredible views all day. I passed junctions for Boulder Lake, Marshy Lakes, and Bloody Run Trail, all before lunch. I found a nice saddle somewhat out of the strong breeze to eat at. I still got pretty cold during lunch. I tried my best to take what I thought was a break but it still wasn’t that long.

After lunch it was more views and even more springs. My right ankle hurt right after I got going, but then it felt okay. I knew it was still hurting I just didn’t feel it. My feet need a day off. Maybe tomorrow in Etna? I passed a father and son, then two more gentlemen who were with them. The one guy wanted my picture since I was going all the way. It’s so nice to talk to day/weekend hikers. You can feel their excitement when they talk to you about your trip. It is really cool. I hiked on after chatting with the guys and crested two saddles before I started a steep descent to the South Fork Scott River. Once there, I soaked my feet. At first I could only keep them in the water 10 seconds it was so cold. I worked my way up to 35 seconds after about 4 soaks. It hurts it was so cold! I filled up my water supply and started a 6.2 mile climb.

I got to Forest Highway 93 at Carter Meadows Summit, where I hung out on the road side and snacked. I really hoped someone would stop with trail magic. I only saw two cars but no magic. I finally started the rest of my climb. I climbed through forests on my way to a rocky exposed traverse. At the end of the traverse, I was hungry and tired so I found a spot out of the wind and cooked. The sun was still intense and was cooking me. After dinner I descended a bit and all of a sudden I heard what sounded like someone banging their dinner pot. I figured there was someone up ahead and I might have found someone to camp with. Just then I saw a grass slope in which I was headed for, and I thought, “hey, that might have been a cow bell”. Sure enough the hillside was covered with cows. I laughed out loud at myself. I then climbed through that same hillside above the cows and hoped to find a spot on the ridge above. I could have fallen asleep to ringing bells. “I need more Cow Bell!” The ridge was all rock so I had to hike on a few tenths. When I got to the border of the Russian Wilderness, I found a perfect saddle to pitch camp at. I had my dessert and cleaned up. Then it was off to bed.

Scatman 2011- Mistaking the cow bells for cooking pots cracked me up.  Even though I had just eaten I thought maybe I’d get a second dinner out of whoever was cooking.  I laughed about it most of the way up the grassy slope.  Though there were a bunch of cows in the same field as me I barely saw them.  The undergrowth was so tall I couldn’t see them.

The views on this day were amazing.  The Trinity Alps Wilderness is an amazing place worth hiking.  I truly enjoy myself for the whole day.  Some days the views are great but the trail is step so it’s hard to appreciate what you’re seeing.  Not today though.  I would love to come back to here some day. 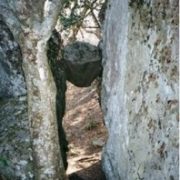