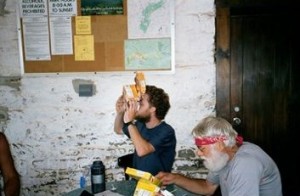 It rained again last night.  I slept like a baby though.  I got up late, 6:30 AM.  Tangent has made me soft.  I hit the trail alone and made good time to Birch Run Shelters.  I caught up to Scarecrow, a section hiker.  I only took a short break then headed to Tom’s Run Shelter. 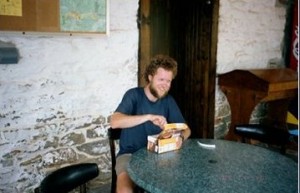 While there, Scarecrow caught up to me.  While I ate my bagel and peanut butter, I was reading the Handbook (Hiker guidebook) and noticed that in 3.4 miles the ½ Gallon Challenge was coming up.  The challenge is to eat a ½ gallon of ice cream in one sitting.  I stopped eating lunch and waited two hours for Tangent, Hatman, Happy Feet and Disco Dan to catch up.  They ate lunch since none wanted to attempt the challenge.

When at the store I selected chocolate and went to work.  Al W. showed up with Vice.  Al finished his ½ gallon one minute after me and I had a twenty minute lead.  He is a machine!  My Hero.  It was a serious challenge.  I was hurting so bad about half way through.  The gang was so supportive throughout my attempt.  I finished but looked blue and felt it.  My stomach was killing me.

The hostel was too much money so we hiked another mile or so.  We are tenths of a mile from the half-way point.  Tenting with the group listed before.  Al and Vice stayed at the hostel.  No fly tonight.

I actually got a 12 oz. Coke down after the ice cream.  I didn’t clip my hip belt on the hike to the campsite.  I bathed at the creek down the hill.

Right now we are sitting around cooking.  I’m not eating as of yet.  Maybe later.

Scatman- This hurt.  I ate my ice cream so slow I had to drink the last bit because it melted.  Al’s thought was if he got the Strawberry ice cream there would be chunks of strawberries meaning less actually ice cream.  I told him he was crazy.  It was still the same amount of food going down your gullet.  I was either wrong or Al is an ice cream eating machine.  I did manage to eat a small portion of Tangents dinner but it was not much.