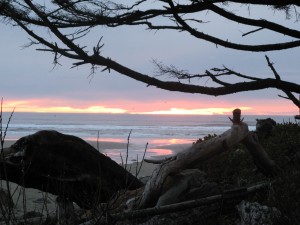 Last night was a cold one. The stars were out and no clouds meant brrr! My morning prep was tough since my hands were so cold. The picnic table was covered in frost.

The stage started out flat on 871 and quickly returned me to 101. At the junction there was a wildlife perserve and there were hundreds of Canada Geese. The road then undulated until I hit Slab Creek Road outside of Neskowin, where it turned upwards. The hill started out mellow and then the last 1.5 of the 5 miles got harder and very curvy. Once to the top of the cat. 2 climb, I was blessed with a 4 mile down hill through some beautiful woods and farm fields. The descent was very curvy and no one was on the road so I took the turns like I was El Falco. I cruised down at 25+ mph and almost never touched the brakes.

Outside of Lincoln I went around Siletz Bay which was very pretty. Next for amazing sites was Boiler Bay. I had lunch here, what a place! It was very rocky and there were lots of rocks just off shore where the ocean was crashing against. 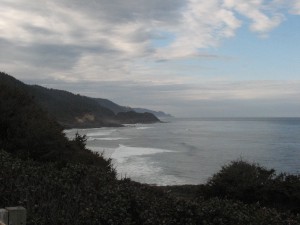 I then turned off 101 onto the Otter Crest Loop and was once again hit with some amazing scenery. Today was the most scenic yet. From Otter Creek, which navigated Cape Foulweather, I could see Devil’s Punch Bowl and Yaquina Head Lighthouse.

I then missed the side route around Newport as well and went through downtown. That was followed by a large bridge where, like the tunnel, I had to push a button before I crossed. I’m not sure why since the sidewalk was plenty big enough for me.

After Newport I stopped at Seal Rocks and enjoyed yet another fine sight. It was then just a short 5 miles to Waldport. I’m a few miles south of there at Beachside State Rec. Site. I enjoyed my dinner on the beach and watched a great sunset. 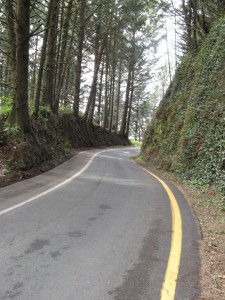 For the record I have seen 16 gloves on the roadside during the trip so far.

Scatman 2011- I read this post and look through the 2 dozen photos I took and it amazes me how much I saw in a day.  It’s surprising I actually covered the miles I did with all the stops to eat, look at the ocean or to just figure out my route.  To keep my sanity I counted gloves on the road way and other things I saw.  I would say that 98% if not 99% of my day I spent by myself.  It was rare I spoke to someone for more than a few minutes.

Be sure to checkout Flickr to see yet another great sunset.  Dinner on the beach was a great end to the day.