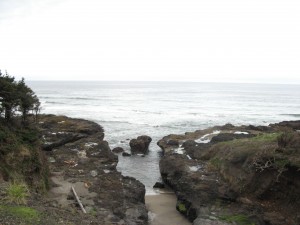 Today’s stage can only be described as rolling. There were hills, two cat. 3 and some 4’s. The special part was it was a mountain top finish. The park I’m at is on a hill. I took top points toward the polka dot jersey.

Basically from just before Yachats to the seal lion caves, it was one stop after another as I admired the beautiful coast line. Cape Perpetua was great, Devils Churn wasn’t churning but you still got the feel. (Devils Churn is a long cut inward to land from the ocean, where in bad weather the ocean slams into the cut.) Heceta Lighthouse was impressive and so was the shoreline around it.

The highlight of the day was the sea lion caves on 101. It was $9 admission but so worth it. You pay, then descend some stairs to outside, then walk down the cliff to an elevator that takes you 210′ down to the cave. Once there you swear their playing sea lion sounds on speakers but they’re not. Out of the elevator you walk 50′ to a good size cavern with displays and video. To the left is a fenced hole looking into the main cave and it’s filled with sea lions. There were small ones and big ones. It smelled of sea, animals, mold and some thing else, probably scat. The noise from the cave was so loud! It was funny to listen to them bicker at each other. Opposite the fenced opening you looked through to another side cave that must have been 200′ long that exited the main cave out to sea, to the south. There was a third opening to the north as well. (An owl is hooting off to my right, it’s a great horned owl, I just looked up his call.) I also saw some pigeon guillemots in the cave. They are a type of bird.

I saw an Osprey dive after some fish in Tahkenitch Lake, which is where I saw some Ring-neck ducks as well. 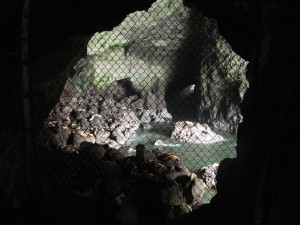 After the sea lions the route went inland east of the Oregon Dunes. In Florence I got a package at the post office and bought a new seat since mine was killing me still. It seemed better but tomorrow’s 70+ miles will tell for sure. For most of the rest of the day, I was just inside of the dunes.

I’m a little over two days from California. It’s hard to believe. Tomorrow I’m headed for Sixes and then on Friday Harris Beach State Park. On Saturday I will cross into California!

Scatman 2011- So the Sea Lion Caves were the the highlight of the day.  I had been looking forward to them since Cannon Beach.  If you’re ever on 101 and pass the caves take the time to stop.  It’s worth the time.  Being that a lot of my route was just inside the dunes I saw a lot less ocean on this day.  Not as spectacular as being right on the coast but a good change.

You don’t need an excuse to play disc golf but it’s a good idea to have one anyways.