Because it represents only a thin accumulation, black ice is highly transparent and thus difficult to see as compared with snow, frozen slush, or thicker ice layers. In addition, it often is interleaved with wet road, which is nearly identical in appearance. This makes driving or walking on affected surfaces extremely dangerous.

The term black ice is sometimes used to describe any type of ice that forms on roadways, even when standing water on roads turns to ice as the temperature falls below freezing.[citation needed] The American Meteorological Society Glossary of Meteorology includes the definition of black ice as “a thin sheet of ice, relatively dark in appearance, [that] may form when light rain or drizzle falls on a road surface that is at a temperature below 0 °C.”[4]

Daring, adventurous, a thrill seeker, and yet sometimes a bad decision maker, Scatman is usually a very capable individual.  He strives in adverse conditions and likes a challenge.  Can usually be found hiking, biking, skiing, or doing other outdoor pursuits, pushing his limits.

Because of Scatman’s slim build he doesn’t have much padding and falls usually result in serious bruising and pain.  Due to this fact he is usually a very calculating and safe individual.  This is not to say he doesn’t push the limits in areas he excels in.  So of the areas he excels in are sewing, baking, talking, and gossiping.

Okay, seriously now.  Those aren’t my skills, though I can sew pretty well.  I would like to think my bike handling skills are quite good.  I mean seriously, I got 8th at the cyclocross nationals in Providence, RI where it was 90% snow and ice.  I like to think I’m a very capable rider most days.  I have been riding for 24 years now, that has to count for something.

This morning, in a split second I had every ounce of skill and bike handling stripped away when I went down like a sack of potatoes on black ice.  I hadn’t been on the bike a full minute and I was sliding across the road, hip/ass cheek screaming and my bike mangled.   I popped back up from my fall almost as fast as I went down but the pain slowed me down.  I stood there thinking, “Damn, that fucking hurt!  Should I go back for the mountain bike?”  I walked it off a bite then gave it another shot, thinking I just had to get to where the sun had hit the road.  I now know it was a bad mistake to ride to work as it did get much better.

If you were to watch me ride the rest of the way to work you would have thought I never had rode a bike in my life.  I was so over cautious and tentative that it took me forever to go the 2.5 miles to work.  My heart was racing and I second guessed every questionable patch of road.  That black ice reminded me that everyone once in a while we all need to be put in check and be made to remember we’re not master of our domains.

The damage to my bike.

The damage to my hip  Suck it Sally, my fall counts! (it’s actually much blacker than it looks here.  I thought a pen exploded in my pocket when I saw it)

My bruise on my left ass/hip

———-
Scatman
Get out there!
Powered by adventure, fueled by

Feed the Machine, hydrated by nuun, organized by GYST Concept, kept clean by Action Wipes, and built for life like Stanley. 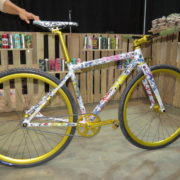