The other day my roommate talked me into going mountain biking at Duthie Hill.  I was game since I’ve only been on my mountain bike a few times in the past couple of months.  We successfully rode three laps of the entire cross country loop then we stopped in the center.  James rode off on one of the low skinnies (thin board or tree you ride on top of ) so after taking a hit off my bottle of nuun I gave chase.  I looked up and saw James either turned off as the skinny had options or he fell off.  The testosterone kicked it and I thought “I can go further than he did!”

I made it past where James had made it to and as I navigated the skinny I looked up and there was a ditch five feet in front of me which the skinny went over.  I mentally froze for a second, lost my balance and nerve, then I got them back just as fast.  I said, “You CAN do this!” to myself.  I got lined up and when I thought I had it I pedaled hard.  That was the last thing I recall before feeling my face stop my fall.

The front tire fell off the skinny in the middle of the gap over the ditch and it dropped two feet to the ground, which means my face dropped about four feet or more.  I hit hard, really hard and my head was swimming for the first minute.  I wish I had taken a picture before we wiped my face off.  I guess it was covered with dirt and I looked much worse than I already am. My hands never had time to leave the bars which means my face stopped my downward motion.  I wrenched my left thumb pretty bad in the crash too.

James was quick to my aid as I said something like, “James I’m DOWN!” and he turned around and came to my rescue.  If you ever get in a crash you want James on the ride.  He does not hold a current first aid certificate but he does carry everything you might need to patch someone up.  If you have the know how he had the tools to repair you.  As I sat there and cleaned the layer of dirt off my face James just looked at me with this worried face of “OH SHIT, Craig looks bad”.  His look was great but he couldn’t hold a candle to this dude standing on the other side of the pump track (a pump track is a short course with small mounds where the goal isn’t to pedal your bike but to move your body in a way to propel yourself) 30 feet away.  This guy just stood there saying nothing.  He just looked at me with a slack jaw.  He need not say anything as his face said it all.  It was one of those faces you could insert any number of comments.

James and I came up with a few.  “DAMN! That guy just SMASHED his face!”, “That’s going to leave a mark!”, “Jimmy come over here and get off that bike, we’re going home and getting you a violin.”, and “Uuuhhh, I wonder if he’s okay” (mind you he never said a single word, some other young kid came over to check on me which was nice)

To say the least I was in a lot of pain at the time.  I ended up braking the lock-out off my bars, jamming my thumb, getting the black eye, and a small chip of on of my lower front teeth.  It hurt to even sleep on that side of my face for a while.  This just reinforced the notion that one usually gets hurt not while racing but while playing. 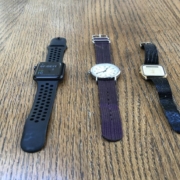 How to Save Time When Bikepacking