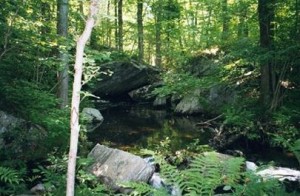 I slept very well last night.  The trail was normal NY style.  If theres a pile of rocks, you’re going to climb it.  We did have a great break at a viewpoint over Canopus Lake.  We had lunch at RPH Shelter.  The water was from a pump.  At first it was only a little funky.  It tasted like iron.  As it sat, it got cloudier and cloudier.  It was terrible.  I hung out all my gear, which was damp.

Tangent, Moonshower, Anduleia, Happyfeet and Hatman all left before me.  I wasn’t even packed.  I put the afterburners on and caught all of them.

We had lunch/dinner at Mountain Top Market.  I got Yodels. Coke (12 oz), and a Gatorade.  Then I ordered a pizza and got another Coke (20 oz.).  Then I had a Ring Ding and another Gatorade.  To say the least, I was full.

We had another four miles to go in which I saw another Ribbon Snake and four deer (65).  Even though we’re at a shelter, I’m tenting.  I don’t like the mosquitoes.  I’ll buy a head net in West Hartford with Jim.

My scalp is so dry.  I found another tick walking on me and another one dug in on my hamstring down near my knee.

I saw two adult turkeys with 6-8 young and another adult with over a dozen young.  It was really funny to see the babies flying.  They’re almost as funny as an adult turkey.

Scatman 2011-  I can totally recall eating and drinking all that food but I don’t recall the market at all.  The weather was typical New England weather, hot and humid.  Ticks occupied my thoughts whenever we went through grass or over grown brush.  I would do spot checks ever 10-20 minutes some times.  I constantly had that “something is crawling on me” feeling most of the day.  It didn’t help I was usually the first on down the trail so I had to walk through all the silk worm webs.