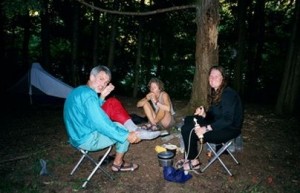 Tonight it is my fifth night tenting.  A record, Im sure.

I got up super late today.  Hatman and Happyfeet were leaving camp and I was still in my bag.  It was probably 6:30 AM. 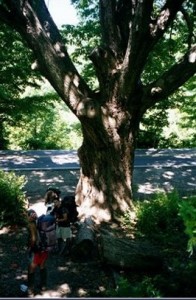 I picked up and hit the trail, catching Tangent at Nuclear Lake.  It’s a beautiful lake, which was contaminated in 1972 with low-level radioactive materials.  It’s clean now so they say.  All the same it was nice to look at. 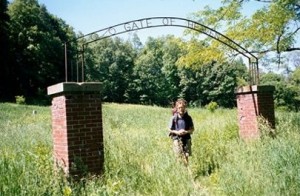 Further up the trail, I caught Hatman and Happyfeet and Moonshower.  We all stopped at West Dover Road, where the Dover Oak stands.  It’s another giant oak tree like the one in TN.  This one is supposed to be bigger.  All in all its one huge ass tree.

I left along after a debate on whether or not go to another deli 2.4 miles further up the trail.  Moonshower caught me right before the turn for the deli.  We went!  Lunch was chips, ham & cheese with tomato and lettuce, and a package of Devil Dogs.  A Coke, of course, to wash it all down.

On the way back to the trail, I saw a dead cedar waxwing on the side of the road.  We walked through a bunch of fields and the heat was terrible.  It was 80 in the shade.  We caught the group again picking ticks off each other after another shitty maintained section of the trail.  I found a deer tick on me.  Then when we stopped for water at the next shelter, I found another under my watchband.  That makes 5 deer ticks, 2 crawling and 2 regular ticks!  Glider, Speedy and B/A were at the shelter.  After a long chat, we moved on.

1.2 miles after the shelter, I crossed in CT.  We have to dip back into NY for a couple of miles but tonight my head rests on CT soil.  I saw two deer (67), one earlier in the day and one after crossing the line.  I climbed one more mountain, then descended down to Ten Mile River to where we are camping. 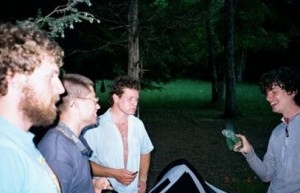 I cooked, cleaned, and read.  Then played a little Hackie Sack with the boys.  Theres a crowd here tonight.  Tomorrow its on into CT for good and a night with Tangents Mom and sister.

My watch shit the bed.  I’m lying on it right now.  Its buzzing and wont stop!  Batteries must be low.  I don’t think I have a screw driver small enough to open the back.

I also saw another ribbon snake.

Scatman 2011- The Dover Oak did in a way what the 1800 year old trees on Mt. Badin Powell did to me.  I felt so insignificant when I thought about how long this tree had been standing there.  To think it started as a seed and grew into this mammoth was mind blowing.

The second picture in this post is of me standing under an arch named “Gate of Heaven”.  It was more like “Gate of Hell”.  You’ll notice I’m standing in hip waist grass.  That meant one thing, TICKS!  I believe we picked about a dozen off ourselves in this one spot.  The whole group was mentally worn down by the lack of trail maintenance in NJ and NY.  We were all so tired of bush whacking while actually being on the trail.