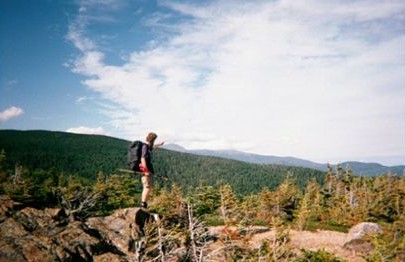 Another early morning. I was on the trail at 10 of 6. Rain last night, trail was slippery.

The hike to Galehead looked really far. I was really dragging ass most of the way. Once there I got Coke from Captain. The huts will give thru-hikers leftovers. We hung out for a while then moved on. 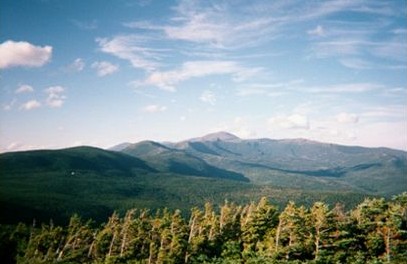 Next it was over South Twin another 4,000 peak to add to the list. From there it was a long puddy downhill to Zealand Falls Hut. I got a bowl of hot soup. I ate lunch and chilled for a bit. We still had 14 miles to go. From Zealand the trail followed an old rail bed. So the next 5 miles were flat. We passed some kids doing trail work. They were building bog bridges. The descent into Crawford Notch was tough on the knees. 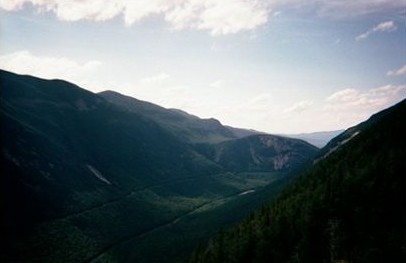 We all (Arlo, Crash and Burn, and Canine) stopped for a break before climbing up Webster Cliffs.  Talk about a tough climb.  Arlo and I were hurting by the top.  We confused Mt. Webster with Mt. Jackson so we were crushed when we realized we had more to go.  We both were light headed and not feeling our best.  Dehydration for sure.  I pushed myself to get to Mizpah Hut and finally I made it.  No work for stay was available so we all had to tent.  BA and Vice were there.  BA was happy to see us all.  The first tent spot they showed us was a lumpy, rocky, rooty, mossy mess.  I wasn’t going for it.  The hut and tent platforms were full.  Captain, Speedy and I went to the hut manager to see if they would allow us to sleep on the tables.  After some debate, it was suggested we try another area first for tenting.  That area worked out but it was right next to the Poo field.  A little smelly but it did the job.  I didn’t cook until 8:45 PM.  I was crushed.  I scored two pieces of corn bread and a molasses cookie.  After that it was time for sleep.  Ah sleep!

Scatman 2011- This was a long day.  Arlo and I were really hurting on the climb up Webster Cliffs.  The thing I remember most from this day besides being denied the option of sleeping in the hut was Canine showing me his Jujitsu.  We stood on a foot bridge with rails (it was maybe 3′ wide) at the base of Wester Cliffs and he said, “Pretend you have a knife, and come at me with it”  I pretended to thrust the knife at him and he s

mashed my forearm and noted I would have dropped my knife and he would have cut that arm making it useless.

The Low Down on the CDT