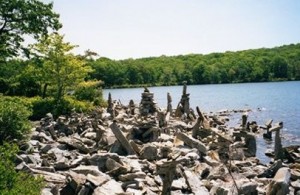 Pete was a little late getting up.  I packed in no time and we hit the road.  No Starbucks for me, the weren’t open at 4:45 AM.  Pete dropped me off around 6 something.  I then went to breakfast with Tangent, Moonshower, and Barbara.  Mukwa showed up later.

The Post Office didn’t open till 8:30 AM so I took a nap.  A bunch of people hit the trail while I waited.

When I got to Sunfish Pond, the first glacial pond, Tangent, Hatman, Happyfeet, Moonshower, Anduleia & Mukwa were building rock towers on the shore.  I built one that was about 7 feet high when it was done it fell over 5 minutes later.  I did a few imitations of Rambo and Val Kilmer with my shirt off.  They all got a kick out of it.  It was then off to a rocky mountaintop for lunch.  We got snacks from a bunch of old guys.  They said we missed two bald eagles flirting with each other by a half-hour.  After that I went on alone and took a nap, while waiting for them to show up.  Almost everyone from Leroy Smith is here.  We’re all tented in a field.  Anduleia just found a tick, so Im going to check myself.  EZ-Glider found out he’s got Lyme disease.  He’s on Meds.

My feet still hurt but yesterday helped a lot. 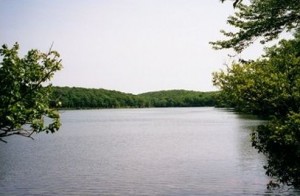 I almost forgot about my run in with momma turkey.  There was six of us in a line.  The first three blew right by a bunch of tiny baby turkeys.  Hatman & Happyfeet stopped and said look baby ducks?  while looking at me the bird guy.  I started to follow the chicks and all of a sudden momma turkey pops up and comes running right at me!  She scared the crap out of me.  I never saw her.  I called to Hatman for help as I backed up quickly.  She backed down when I was far enough away.  To say the least, it was a first.

Scatman 2011- It was good to be with the group again even though I had to wait for the post office.  I didn’t think I’d be camping with the big group again but I did.  The ticks would only get worse from here on out.  Lucky for me I had HappyFeet to check my back.  We were like monkeys checking each other for buys at camp.  The hiking itself was enjoyable with less rocks and easier walking.

One of Seven Project Press Release