Last night was a crazy night.  We noticed wet spots upon arriving at the shelter.  We hoped it wouldn’t rain too hard.  No such luck.  The more it rained, the more leaks appeared.  Finally one hit Tangent right in the belly.  She began to pack up to leave in the pouring rain.  So Bill whipped out his rain fly for the tent.  With his and mine we were able to catch all drips.  In the AM I had two gallons of water hanging about a foot over my head.  The scary part was on the side of the fly was held up by shoving a plastic clip in a crack of one of the beams.  We all stayed dry so all was good.  It just took a bit of brainpower after a long day. 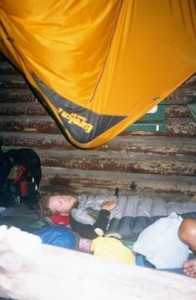 We got a slow start.  My shin was fine all day.  When we got to High Point State Park, we sat around for an hour plus!.  By noon we had only hiked 3 miles.

We hiked to almost 2 PM when we came upon a pond with a dam.  We had lunch here.  I napped at High Point on the floor and here while sitting on a dike.  We moved on later and stopped at the next road, only minutes up the trail.  We heard of this secret hostel.  There is a hand pump for water, two cabins, shower, dryer, large sink and a privy.  One cabin has a huge window.

It’s all in a big field with a few roads running through.  It was no nice, we decided to stay.  I took another nap on a metal hammock, which had a therma-rest on it.  I napped because I knew the process of six people deciding whether or not to push on was going to be a long process.  The other half of the crowd showed up later around 5 PM. 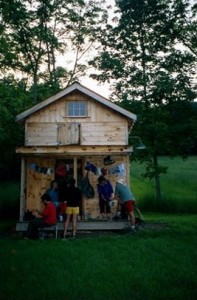 Theres a corral with two donkeys.   They keep biting each other and the one bitten screams out.  They walk in a circle trying to bite one and another’s back feet.  It’s really funny.  I believe I got an action shot of one kicking the other with both feet. Tomorrow will be a bigger day to make up miles.

Scatman 2011- This was definitely a lazy day.  I think after the crazy night in that crappy shelter we couldn’t pass up staying in the sweet ass secret shelter which was so nice.  I can’t believe our jerry rigged tarps stayed up all night and kept us dry.  When I woke up I bumped my head on Bill’s fly which was above my head.  It was then I realized just how much water was hanging over me.  I lucked out this day.

The secret shelter’s were awesome.  Staying there was so worth it.  It was a bit jammed with all of us but so worth it.  Some of the “kids” as I called them were there too.  They were another group of 6 hiking together.