I woke up at 4:40 am. I was wide awake. Luckily I was able to fall back asleep until my alarm at 5:45. The moon was so bright but by 4 am it had set and the stars were amazing. The Milkyway was better than I had even seen.

It was a cold morning, so much so I almost put on gloves. I was too lazy to stop and dig them out. I’m serious. I will not stop for something as simple as this if I just stopped not long before. It’s stupid I know. It’s not like Canada is going some place.

Today was super hot with much less wind not a great combination. As an add bonus I had a 2000′ climb to do in the heat of the day. To say the least I do not have my climbing legs yet. I topped out at 8007′. Today for the first time I said “FUCK!” as a response to seeing yet another steep pitch.

Water was scarce today. In the first half of the day I didn’t have enough then I had too much in the second half. The second half started with a few miles of trail then it was a five miles dirt road walk.

I was like Goldielocks today on the road. The surface was either too hard or too soft. Both are a bitch on the feet. With all the water my dogs were barking!

I met a bunch of new hikers:  Pacer, Truma, Fozzy, Hojo, Wide Angle and Retant (sp). All but the last two are here at camp tonight.

Tomorrow is a 12.3 road walk into Silver City. Ugh! Only positives are the Tour of Gila time trail will be going on and I get to shower.

My big climb of the day was over Borrow Mtn and I was really hoping to see a borrow but alas I didn’t see one.  The views were great though.  There was a massive mine in the area and one could get a great view of it from the top.  When I say massive I mean MASSIVE!  Impressive and horrifying what man can do. 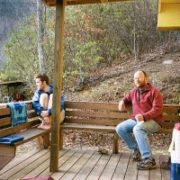 Gear Review - If I Hiked The Long Trail Again