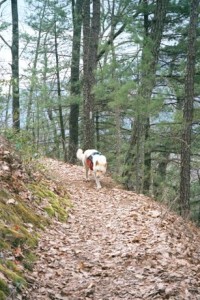 Snow for half of the day then actual soil.

Got up early today and hit the trail at 7:45 AM.  Bluff Mountain wasn’t bad but the snow once again made things tough.  About half way down Bluff the snow was gone.  I caught Not Yet and Numb the owners of Miya, the dog, at 11 or so.  We pushed on to Deep Park Shelter, rested then I went ahead into town.  They followed later.

Tonight Im staying in a small, I mean small, cabin along the French Broad River with Mr. Pat, Gadget, Slack, Numb, Not Yet and the two Dogs Dana and Miya.  Its most definitely a full house.

I saw some deer tracks today.  Im not sure if I mentioned it but I followed wild turkey tracks into Davenport Gap.

I saw a killdeer today at the campground.  Then I saw some chickens and baby chicks. 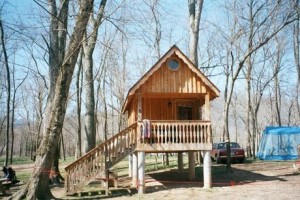 I’m sitting at the cabin next to ours at a fire where three guys are playing their guitars.  A real camp experience!

Im glad to be back with Mr. Pat and the others.  I like their company a lot.  Tomorrow I have to take another zero day since I didn’t get to the post office in time.  I got a new headlamp, some wheat meat jerky Yummy and postcards to help in tomorrows down time.  I will hit the spas and maybe the library to use the internet.

Scatman 2011- I never did get to the hot springs which the town was named after.  I did go to the library and the outfitter again.  I day dreamed about getting lighter gear but the thought of buying more gear after buying so much already and the fear of learning to do with less kept me from cutting my pack weight. 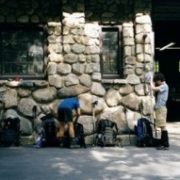