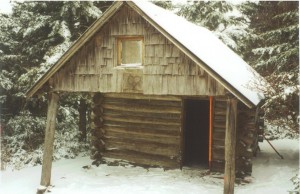 Citrus and Norway showed up late with Summer (dog).  We all didn’t get out of bed until 10:30 AM.  Mr. Pat, Gadget and Slack all came by.  Slack packing southbound.  We (Agatha and I) got on the trail at 11:20 AM.  The hiking was good but the wind was so hard.  It snowed until around 1 PM.  The snow was about 4-6 inches deep.  The drifts got up over one foot. We stopped at Clyde Smith Shelter for lunch.  It was a hole in the wall. 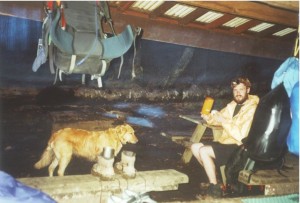 When the wind blew really hard, which was most of the time, the ice on the trees made a sound like that of grease popping in a hot pan.  I was thinking any one of them might crashed down on me.

We passed about 4 sets of deer tracks, a wild turkey, one grouse and one mouse track.  No actual sightings though.

The climb up from High Knob sucked.  I was so beat.  My lower back was killing me.  It was 2,000′ over 2.5 miles.  At times it got real steep and the snow was getting a lot deeper and so were the drifts.  Some were up to my knees.  My hands started to go numb from the cold.

We’re at the highest shelter on the trail tonight.  It’s cold as shit and windy.  Agatha set her tent up inside.  We’re sharing it tonight.  A thru-hiker named Beatle is here too.  My hands were so cold when I went for water I wanted to cry.  Then I had to go shit of all things.  Cold, real cold.  My boots are frozen already after only a few hours.

2011 Scatman- This was a hell of an April’s Fool Joke by Mother Nature.  Reading this entry now I realized I forgot about sitting around all day before starting.  I almost wonder if I would have made it to the next shelter if we had gotten up earlier.  The weather was terrible and it made the 15 miles we did really tough.  It took all I had to cook dinner that night.  My hands were so cold it was hard to do anything.  I don’t think sleeping in the tent inside the shelter helped keep us any warmer.  It was a long long night.

The sound the trees made that I described above was freaky.  The ice on the trees was so thick.  I’ve never seen or heard  anything like it.  I was sure one of them was going to fall on me.

Sorry but no photos right now.  I’ll have them by Saturday, so come back then to see them.