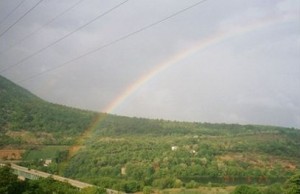 Slept well last night and didn’t want to get up.  Had warm oatmeal for the first time in forever.  It was raining again this morning. 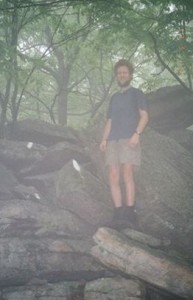 Tangent and I found Vice camped along the trail.  He missed the turn to the shelter.  We had only one climb and it was in the beginning.  Tangent set a torrid pace.  We made okay time despite the rocks.  We planned on stopping at a diner just for coffee and a cake and ended up eating a full lunch.  I saw the start of the Indy 500 and saw Scott Sharp hit the wall.  I also found out Colorado won game 1 of the Stanley Cup finals.

After lunch we crossed the road and missed the turn for the AT.  Someone camped on the trail so I didn’t think the AT went through their camp.

I saw 3 deer (59) today.  We also saw the crazy guy (#2) who was living at Bake Oven Knob.  The thunder started with 2 miles to go.  We stopped at the last shelter where 4 weekenders were spending the night.  I was giving Tangent so much shit about not wanting to walk in the rain, that when Hatman and Happy Feet got there later, the people asked if we’re married or brother or sister. 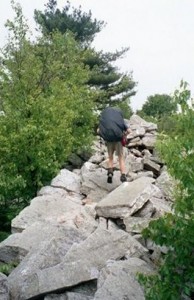 Right before the road we saw the best rainbow.  It was great.  We attempted to hitch but got nowhere.  Hatman and Happyfeet showed up and some free lance photographer came up and wanted to take our picture.  We conned a ride out of him.  His car was so full of trash.  There was so much trash, it was up to the level of the front seat.  I got the front with my pack on my lap.  My head was up against the window.  Tangent got to sit in a pile of vomit, while having Hatman’s pack across their laps.  Hatman and Happyfeet were with her in the back but didn’t have to sit in any vomit.

This guy was all nice when no one gave us a ride he went nuts.  He said everyone from the area were assholes and losers.  Much more was said but I’ll just say some four-letter words were used to describe the people of Palmerton.

Once in town we hit the hostel to find EZ-Glider, Crash and Burn, B/A, Shera, Princess of Power, Moonshower, Captain Knatty and others.  A real full house.  I took a great HOT shower and did my laundry at the same time.  Then I attempted to shop for food but it was 9:30 PM and everything was closed.  I cooked what I had and now its 11 PM and Im beat from my longest day yet.  My elbow is killing me from writing in bed.  I’ll write more tomorrow.  We might zero here since so many people will be trying to go to the next shelter.  Theres still two more days of rain forecasted.

Scatman 2011- I don’t recall the crazy guy but I do recall the people thinking Tangent and I were a couple or brother and sister.  This was probably an early sign that we should have not been hiking together.  As time went on it got worse.  I can see that now.

The whole ride into town thing was just fucked up.  The guy didn’t tell us he’d been living in his car or the fact that he puked in it.  When we got to town Tangent and Happy Feet practically ran from the car, while Bill chatted away with the guy.  He and I didn’t know about the puke.  Once I was told I did my best not to laugh and got Bill (Hatman) out of there.

How to Prevent and Treat Blisters