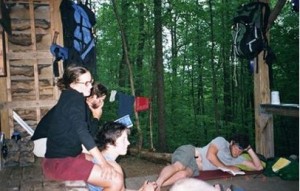 I slept well last night.  Not too cold.  Around 4 AM I put on my shirt and zipped up.  No pants or hat or socks.

I hit the trail at 6:20 AM.  Al and Bill blue blazed but it turned out to be not worth it.  They hiked 3.8 miles and I did 6 over a huge mountain and it only took me 5 minutes more than them.  We snacked at Maupin Field Shelter. 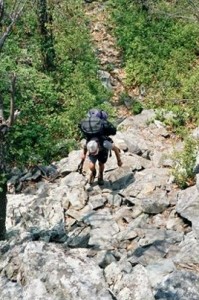 The closer I got to lunch, the more hungry I got.  We stopped for lunch but at the wrong spot.  We were suppose to be at Cedar Cliffs.  I left there and when I got to Dripping Rock, I removed my pack to douse my head and stepped on a bull frog.  Al arrived and pointed out there was a snake right in front of me.  It has a Lizard Frog in its mouth.  It backed into a hole but the poor frog couldn’t fit.

There was a class of students studying flowers too.  All girls.  It was visual overload.

Once I got over Humpback Rocks, I got into an awesome groove.  I was flying along.  I made great time and got to the shelter by 3:40 PM.  I cleaned up, settled in and ate.  We have a full house too.  BA, Surefoot, Easyglider, Red. Tangent, Two Speed, Crash, Burn, Al, Bill and I.

I thought Crash and Burn were guys and it turns out they are girls right out of high school.  Burn has some funky glasses.

Scatman 2011- I remember Al and Bill being amazed that I did over two miles more than them and was only 5 minutes behind them.  It probably helped I was half Al’s age and a little over half of Bill’s.  Humpback Rocks was a scramble and it seemed so out of place.  It was just a pile of granite rocks that made up a climb.

It was around this time that I met the people I would hike with the rest of the time on the trail.  I didn’t leave Al and Bill but there were a lot of first time encounters.