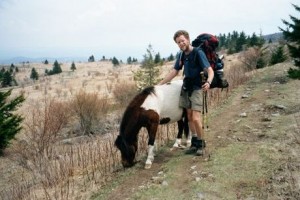 Another hot day.  I think the back of my neck is burned.  I cant begin to describe how beautiful the Grayson Highlands are.  It was unbelievable.  Rocky, grassy and spruce and fir trees.  The wild ponies were up there, too.  One had a baby foal.  It was tiny.  I can see why Baltimore Jack said 7 out of 100 hikers say its their favorite spot on the trail.  I saw two deer and got a photo of one.  I also saw 4-5 chipmunks , too.  Lots of butterflies around.  It’s really warming up.

Once again, my feet killed today.  I had to stop on the first hill today.  I was so hot; I was going to pop if I didn’t stop!  My lower back is screaming even though Im sitting against the wall. 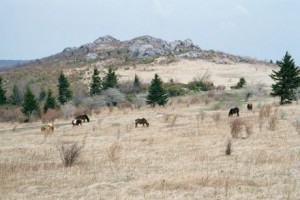 Scatman 2011- The Grayson Highlands were amazing.  I can’t imagine what it’s like later in the spring when the flowers are in bloom.  You could shot an old west cowboy film in them.  It’s all grassland and large rocks.  A stark contrast to the green tunnel of most of the AT.

The ponies I mentioned were miniature.  They were very short and round.  I believe they live up on the Highlands most of the year but are brought down in the winter.  They sure have a sweet life up there.

You don’t need an excuse to play disc golf but it’s a good idea to have one anyways.