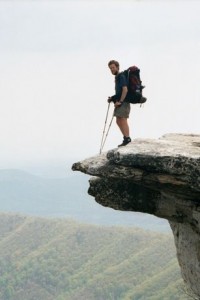 What a terrible nights sleep!  I fast packed last night.  Fast packing means using only the ground sheet, poles and fly of my tent. All night long I itched and twitched thinking one of the thousands of spiders I saw during daylight were crawling on me. It was not enough I tried to sleep on top of my bag.  To say the least, I was not well rested in the morning.

The early part of the trail ran through some cow pastures.  A young calf ran when he saw us.  We must really smell or look bad.  Then came the climb to another ridge.  We passed two turkey hunters, then Al.

As I approached the top of one climb, a black snake shot between my legs and skimmed across the leaves like it was floating on air.  It scared the crap out of me.  It was about 3 feet long.

We crossed VA 311 then stopped briefly at the Boy Scout Shelter.  Al joined us too.  The shelter was nasty.  It was made from two by fours and corrugated tin.  Big but not somewhere I would like to stay.  We skipped the Catawba Shelter.

McAfee Knob was a tough climb but the view was great.  We all hung out for a bit.  There were huge rocks on the top in the woods.  Some were 6-8 times the size of my Jetta.

My foot started to act up on the way down.  Where the tongue of the shoe is, it tore up my second littlest toe.  I had to tape it up later.  A front moved in which I put my pack cover on but it never really rained.  Just sprinkled.

Tinker Cliffs were spectacular too.  You could see back to McAfee Knob and across to the next ridge which must have gone on forever.  The wind was fierce so I didn’t stay long to look around. 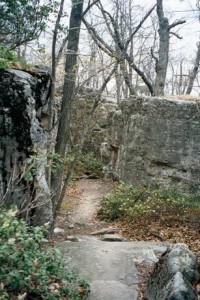 We saw a box turtle on the trail today and I saw a deer before I got to the shelter.  Theres a resident rat here at the shelter.  I saw three (3) birds today (two unknown and a Tufted Titmouse).

I also saw a giant salamander.  It was red with bluish spots.

Scatman 2011- Despite the foot issue later in the day this was a great day.  I really enjoyed McAfee Knob and Tinker Cliffs.  You just couldn’t take in enough of the view.  The impressively large rocks after McAfee Knob were crazy too.  They seemed so out of place, almost like they had been put there and arranged just so.  Even with a rat living under the shelter Lamberts Meadow was a great resting place.

Gear Review - If I Hiked the Pacific Crest Trail Again