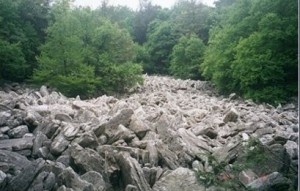 I woke up around two when Vice came in from Answering Mother Natures call.  Vice can be noisy.  He wasn’t this time but I woke up anyway.

We all got up early for the big 23.7 mile day.  Why I don’t know, I was done by 3 PM/  My feet were killing and still do! Rocks, lots of them. The only good thing is theres only 4 days left.

I caught Anduleia, Speedy, Mukwa, and their friend, Bill.  Brent and Andy were in town when I arrived.  They were supposed to do another 15 miles but when I left the bar they were drinking.  I don’t thing they made it out of town.

This isn’t the trail but some times it seems like it was.

Tonight we are sleeping on a covered pavilion in Port Clinton.  It’s raining and its very damp.  I put my tent up but I’m still going to wake up damp.

I have tons of food now.  I’m bumping most of it ahead but the holiday is messing things up.  I don’t know how Im supposed to get my shoes in the Water Gap.  I don’t thing they’ll get there in time.

The bird count is up to 67.  I saw a Belted Kingfisher. Cliff Swallow, swans, and white geese (snow geese?).

I saw a deer (55) right as I left the woods today.  It was right next to me when it ran up the hill.  She/he stopped only feet up the hill, so I got a picture.  I hope it comes out.

Time to get ready for bed.

Scatman 2011 – Port Clinton wasn’t much of a town but if it has a Post Office it’s all a hiker needs.  Even then a Post Office isn’t necessary if an outfitter or other location in town accepts packages.  There was an outfitter in town and hotel with a restaurant.  I believe I at there with some of the group.  Years later I worked with the owner of the outfitter to get Nuun in his store and also supplied a few of his Boy Scout trips with Nuun.