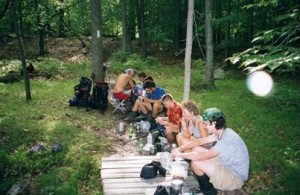 I felt as it I was getting a cold last night, but no signs of it today.  I slept in to 7:40 AM.  I was slow starting up the first days climb. 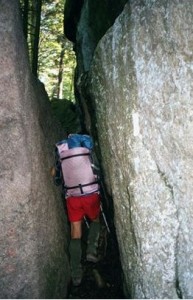 Mostly the first part of day the was uneventful.  All except the Lemon Squeezer.  It’s a giant rock formation that has a huge crack in which you have to squeeze through.  Hatman had to take off his pack.  Theres also a hand over foot climb after the crack. 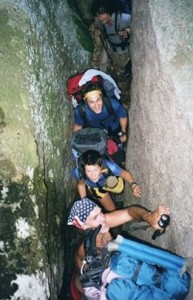 We had lunch at a large lake.  Tangent and a couple of the others went down to the beach, which had closed sign on it and as a park ranger in a pickup truck rolled up I said, “Watch this, he’s going to yell at them!”, to Hatman.  The ranger got on his speakerphone and kicked them off.  It was funny.  We laid around on the grass.  I got a little burn on my back and the grass gave my chest a rash.

The ankle is better but still red.  I’ll tape it again tomorrow.

The Captain caught up and has joined our tribe.

We got two different views of the NYC skyline today.  It was really neat to think just 35-45 miles away millions of people were trying to live in a little area.  Also the area we hiked in was like a bowl.  You could see pretty far but not forever like usual.  So it felt like you were bigger.  Like Hey, this place isn’t so big after all. 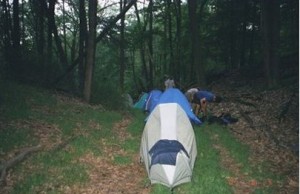 We are camped a few miles from Bear Mountain State Park.  The caterpillars are so bad, it sounds like its raining outside.  We are camped all in a line on an old dirt road.  It was hard trying to put my tent stakes in.

Tangent keeps telling me she’s going to buy some Beano and slip it in my food.  I have been farting like a champ lately.  I’m training Hatman to follow in my shoes.

Scatman 2011- When we were at the Lemon Squeezer I got my camera out and stood above the opening to take a picture.  Hatman looked up and said “Scatman, I can see your junk!”  Everyone laughed and I almost fell over trying to move and laughing at myself at the same time.

The beach scene was great too.  We totally saw the whole thing coming and didn’t saw a thing.  I was happy to have Captain in our group.  We had to cross a busy 4 lane highway and Tangent went off on the ATC for not having a bridge.  I was pushing her buttons so I sat down in a lawn chair I found and bid my time on the side of the road, got up slowly as an opening formed, and slowly sauntered across the road.  I said something flip like, “See how easy that was, no bridge needed!”  She was pissed.  Captain had second thoughts about joining our group by lunch time.  Tangent didn’t talk to me much the rest of the day.