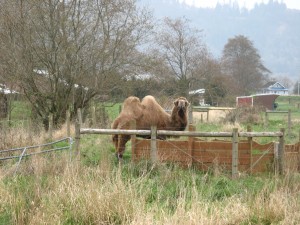 I’ve decided to call days ‘stages’ since I started to think of my day like it’s on stage in a race of many. After yesterday’s flat stage where the peloton had it easy, today’s stage included one cat. 4 climb right from the gun and then a cat. (category) 2 that was 2.3 miles long. That was quickly followed by two cat. 3’s, with a flat slightly uphill finish.

I was tuckered out today. My butt is so sore from being in the saddle all day. My right hamstring is still getting tight as well.

I got up earlier today than any day so far but still managed to miss the 9 am ferry at Puget Island. I had to wait for the 10 o’clock one. On the way to the ferry I saw a first and probably last. I had just seen some horses, cows and the day’s token llama when I had to take a second look. I saw a camel! Her name was Camelia and she had the double hump. She used to have a friend but it died recently. I learned all this from a woman in her bathrobe who live on the other side of the street.

Once off the ferry it was right up my biggest hill yet. After that two more smaller ones and then the road just rolled up and down, up and down.
Just outside Astoria I rode through a shower which thankfully stopped once in town.

I rode the sketchiest stretch of road yet on the way out of town. It was an elevated bridge across part of the harbor and it had a small shoulder and it looked as if it never got cleaned, ever. I was so fearing a flat.
I cursed Oregon for mismarking the mileage to the park. It said 1.5 miles ahead and it was more like 3. So tonight I’m at Fort Stevens State Park. $4 for the night and a hot shower. I even powered up my cell phone in the bathroom. It’s been misting off and on so it looks as if the rain will be here tomorrow like they said. 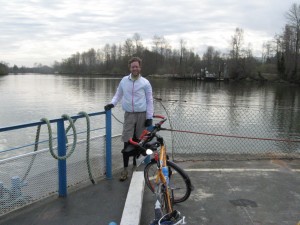 That’s it, I can’t hold my arm up to type any longer. Birds: Chickadee; Humming Bird (Not sure what kind); Female Red-wing Blackbird.