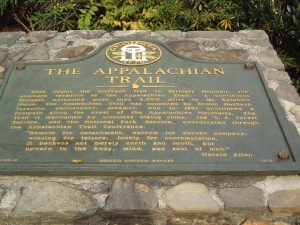 10 years ago today I flew from Boston to Atlanta, GA to start my Appalachian Trail thru-hike. It would be the first step towards completing a 15 year long dream. I first climbed Mt. Katahdin, which is the northern terminus of the AT when I was just 13. While on the top I marveled at the beauty around me. Upon reading the sign at the top which stated it was the northern terminus of a continuous footpath from Springer Mtn. in GA, I asked my dad if people walked all that way.

Over hearing me a hairy hiker pipped up and proudly said, “YES, I just did it!” He had just completed his own thru-hike. It was right then that I knew I would one day stand as he did and say them same thing. You’ll have to wait to see if I did.

Over the next 153 days I will post each day’s entry from my 2001 thru-hike. Once I have them I will also post one photo a day as part of my retrospective. My Pacific Crest Trail (PCT) journal is now completely uploaded so you can follow it as well starting on March 27th. I will do a photo retrospective for it as well. (photos will be posted on Flickr, which can be found on the right side of each page. I’ll give a tidbit in the description about that day as I look at it now, so be sure to click through to Flickr).

I have left my journal unaltered so I will warn you now my grammar is terrible at times. It’s been a while since I looked at these entries so I’m looking forward to it. Please follow along and I hope you enjoy the journal.

Well I’m here in Georgia. The flight was good but a little cramped. Surprisingly on time and my bag made it in one piece.

I did lose my Leatherman on the plane! I was really bummed about that. I will have to pick up another one.

Peter and Fryer picked me up and told me they had dates for us at the hockey game. It turns out they met three ladies on Saturday night and invited them to the game. Lee, Gillian, and Miranda. Gillian was cute! We all went for a drink after the game, which was a 1 to 1 tie. Unless I eat breakfast tomorrow my last meal was popcorn, buffalo shrimp and chips with a cheese/spinach dip.

I’m at Fryer’s now and I’m off to bed. Rain is in the forecast so I think I’ll be starting in the rain. 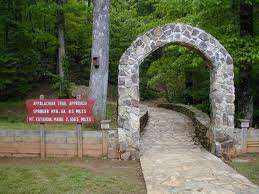 Start of the Approach Trail to the AT

Got up at 7:00 AM showered and left by 8. A glass of OJ was my last taste of fruit for a while. Bill Elliott’s race car garage is about 2-3 miles from Amicalola State Park. I started my hike around 9:45 AM.

I met up with a hiker named Charlie “Lone Wolf”. He’s from Utah, hunts with a flintlock and moccasins, cooks with a dutch oven, has a tee pee, buffalo skins and trades fur. He was something to talk to. He is planning on finishing by the end of June so he left me at Springer Mountain Shelter.

We hiked 9.0 miles today. My legs are tired. It was about 58° at lunch. The temperature is dropping off though. So far there’s three others here at the shelter. Tomorrow I’m heading to Hawk Mountain. I haven’t found anyone I would take as a partner, but hey it’s the first day.

Saw a bunch of turkey vultures, one (1) chipmunk and two (2) Pileated Woodpeckers.