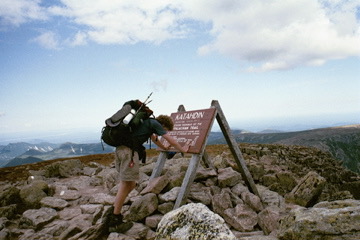 I’ve done it! I’m sitting on top as I write.  The climb was a piece of cake.  I love it.  Jeff and I climbed like champs.  There were only a handful of people up here when I summited.  There are tons of people now.

It hasn’t hit me yet.  I did cry a bit when I got to the sign.  We’re just hanging out.

Wow, three weeks have gone by!  I can’t believe it’s over. I’m sitting in JFK International Airport as I write.  I went fishing for 10 days in Maine and now it’s off to sunny California to see friends.  Time is flying by.

My emotions on top of Katahdin were not what I had expected.  I thought it would have been sadder or more exciting but it wasn’t.  The kids would have added excitement I’m sure.  Katahdin is such a awesome place.  It was diffidently the best mountain on the trail.  The views were incredible.  I didn’t want to leave the top.  Doing that would mean leaving the trail.  I didn’t want it to be over but at the same time I did.  There were people I wanted to see again, stories to tell, and good-byes to say.  Luckily after the summit quickly filled with day hikers I was able to hike down and see my friends who were finishing the day after me.

Mark, Dad and I along w/ Mortis, Jeff, and Ben, I headed down the mountain.  The descent was slow.  Dad’s knees were hurting him.  Jeff’s folks were 1 mile up the trail and waiting for him.  His mom took a fall and put a scare into all of us.  The reason we left the top was because it was filling up the tourist.  Once down to the parking lot we broke out the cookies and Cokes (on the top we had a bottle of Champagne).  I hung out and said my good-byes to those who were there.

We left Katahdin Stream Campground and went over to Daisy Pond to see the kids.  When we got there they hadn’t even arrived yet.  Rikki Ticky Tavy, Moonshower, And Mr. Potatoe Bread were there.  We wait and the kids showed up one or two at a time.  They had stopped at Abol Bridge to drink.  They were all so please by the goodies we brought.  They all wanted to know how it was (finishing) for me.  We must have hang out for a couple of hours.  A ten point buck came right through the field next to the shelters.  The same moose was at Grassy Pond from the day before.  I actually saw him on my way to the summit when we hiked by in the am.

We made a plan for picking up some of the kids and then headed back to the hotel in Millinocket.  It was almost 9pm before we ate.  Dinner was great.  I called some people to tell them I was done and we watched TV for a while.

The next day I picked up Arlo’s mail at the PO, went shopping for more goodies and had breakfast at a dinner.  We then headed to Baxter to see Kidney Pond.

Wow, it has changed.  It’s not what I remembered.  Everything was freshly painted, the entrance road had moved and buildings were added or taken away.

We then went back to Katahdin Stream Campground to have lunch and wait for the kids.  As we started lunch BA showed up and one by one the rest followed.  We made sandwiches for all and feasted on junk food.  Speedy had his dad bring Champagne to and we drank like four bottles w/ our P+J.  Speedy’s dad had brought his photo album so we all gathered around and had a trip down memory lane.  After that the good-byes started.  They lasted a while.

We ended up with BA, Arlo, Captain and Moonshower with us.  Moonshower got out in Millinocket, Captain in Topsham and BA and Arlo came home with us.  The whole thing didn’t seem real.  Even when we enter Easton and pulled into the drive way.

Upon arriving at home I let the dogs out and said hello to them.  I was happy to see Bo remembered me.  Maggie was just happy to be out.  I found most of the cats too.

Mom came down and we all talked a while, maybe until 2:30am.  I set the boys up in the living room and I got to sleep in my own bed for the first time in 153 days.  Wow, did it feel nice.

The following morning we slepted in.  Arlo and BA wanted to buy some audio tapes and see if we could copy the rubbing of the Katahdin sign I had made.  As I sat waiting for BA to get money out of an ATM at the major intersection up the street form my parents house I realized how ugly we have made things.  Cars were everywhere, people were cutting each other off, running red lights and the whole scene made me sick.  And to think my destination was of all places the “mall”.  We were able to get the tapes but had no luck on getting copies made.  We ended up getting stuck in rush hour traffic trying to meet my mom for dinner.  We had planned on going into Boston to show Arlo and BA around but there were too many things to do.  We made our copies of the music we wanted.  (mine later got eaten 1.5 weeks later on the way home from fishing in Maine).  BA spent most of his time trying to get a flight home.

My reason for telling all this is it didn’t really seem over until we dropped Arlo and BA off to the airport.  BA flew out of T.F. Green in Providence at 9:30am and Arlo was flying at 11am out of Logan.  Dad, Gram, and I drove them both to the airport and said our good-byes.

It was odd not to have them around.  The thought that it was over didn’t really hit me for a while.  I think it was while in Maine fishing at The Pines.  I was walking to the bathroom when I stopped to look at the stars through the tall Red Pines when I heard the wind blowing through the trees.  Right then I realized bow much I missed being outside and sleeping under the stars.  There will be other trips to come.